Which boiler is better: wall-mounted or floor-mounted - a detailed comparison

For most of us, the words "gas boiler" are associated with a massive unit, which, perhaps due to its dimensions, creates a feeling of reliability. Floor boilers really have not undergone major changes over many decades of its existence. However, today we have an alternative - a wall-mounted gas boiler. Unlike his "elder brother," he is lightweight, compact and very flexible to use.

Let's try to figure out which gas boiler - wall or floor - is better to install in a private house for heating. To do this, we will make an expanded comparison of floor and wall units in all respects. 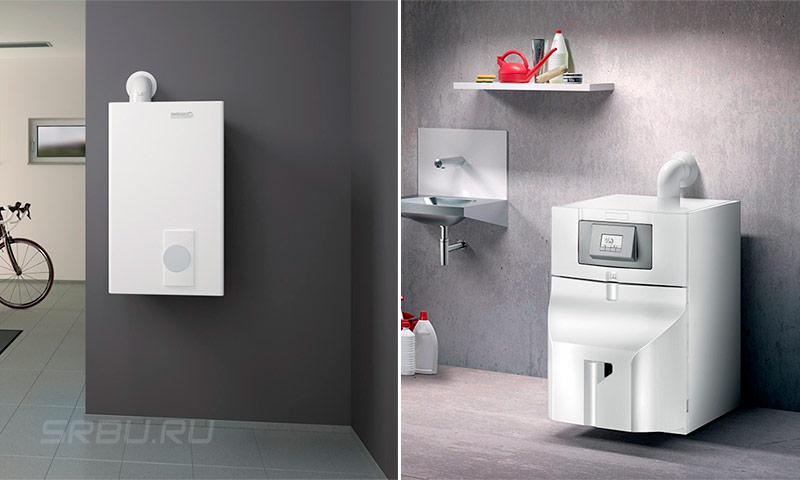 Dimensions are one of the most important differences between wall and floor gas boilers. The dimensions and weight of the wall models are much more modest, otherwise they would simply be impossible to fix on the wall without the risk of collapse. The ease of construction is achieved not only by the overall compactness of the wall models, but also by the material of which the heat exchanger is made. For wall-mounted models, the heat exchanger is made only of steel; floor models can have heat exchangers made of cast iron, which has a significantly higher weight, or from steel.

Wall-mounted boilers are often called mini-boilers. And this is no coincidence, because in a relatively small housing there is not only a burner, a heat exchanger and control system components, but also a circulation pump, an expansion tank and other elements, without which the operation of a conventional boiler room is possible. The compactness of the wall-mounted boiler is its main and indisputable advantage. For such a device, you do not need to allocate a separate room, because you can place it anywhere, for example, in the kitchen.

Wall-mounted gas boiler with a coaxial chimney, located in the kitchen.

Floor models inspire confidence in their sizes. This is exactly what a powerful boiler should be, providing the ability to heat a building with a large area. However, the dimensions of floor boilers often turn into a problem for their owners. Sometimes, to bring such a "giant" into the room, you have to dismantle the doorways. There were cases when, due to the impossibility to bring equipment into the boiler room, the purchased floor gas boiler had to be replaced with two lower power.

The factory-fitted wall gas boiler, as a rule, contains not only the heating device itself, but also a circulation pump, an expansion tank, control system elements, all the necessary sensors and valves. Moreover, all this is hidden in the boiler itself.

By purchasing a wall-mounted gas boiler, you get a miniature boiler room for your use, that is, the minimum set that, after connecting to the heating system, can start a full-fledged work on heating your home.

Of course, if you wish, you can additionally purchase all kinds of room thermostats and regulators, outdoor temperature sensors, a GSM-communication module and much more, improving the heating system of your house and increasing the comfort of controlling it.

A floor boiler is usually only a boiler. Circulation pumps, expansion tank and many other related equipment are not included in the delivery package - you will have to buy everything you need separately.

Which boiler, wall or floor, is easier to install? It would seem that this question should not concern potential owners of the unit, but solely the masters who will be involved in the deployment of the heating system. However, do not forget that the buyer will have to pay for it, that is, you, and the more time-consuming work will be, the more you will have to part with.

In terms of ease of installation, the wall-mounted boiler is the undisputed leader. In the case of the floor unit, you have to equip the whole boiler room, because in addition to the boiler itself, you will have to install circulation pumps, an expansion tank, and maybe a boiler. The volume of work, as you might imagine, differs very significantly, the cost of work will vary just as much.

When buying any equipment, and even more expensive, we want it to serve, if not always, then at least for as long as possible. This fully applies to gas boilers. What kind of boiler, wall or floor, will regularly heat our home for many years?

The life of a gas boiler is primarily determined by the life of its heat exchanger. There is no consensus on which heat exchanger from which material is best - everyone has their own advantages and disadvantages.

In outdoor models, cast iron heat exchangers are usually installed. Cast iron is less susceptible to corrosion, but at the same time it is brittle, which means there is a risk of microcracks during transportation. In addition, it does not tolerate sudden changes in temperature. When using hard water as a coolant, the pig-iron heat exchanger slowly decomposes as a result of scale formation and, as a result, local overheating of the material.

Cast iron heat exchangers are not suitable for wall-mounted gas boilers, because they are too heavy. The most preferred material in this case is steel. The latter is not afraid of shocks during transportation, but it corrodes greatly during operation, especially incorrect.

So which heat exchanger is better? Since the boiler does not have to be transported so often, corrosion resistance can be considered the factor that has the greatest impact on the service life of this structural element. From this we can conclude that from a floor boiler with a cast-iron heat exchanger we can expect a longer period of normal operation.

We should not forget that the life of the boiler is also affected by the wear of other structural elements - circulation pumps, gas valves, electronics, etc. The quality of the unit depends on the quality of execution of each of its individual units. Practice shows that the average boiler from a well-known manufacturer, who cares about the reputation of the brand, will serve you properly for 15-20 years, it does not matter if it is wall-mounted or floor-standing. Nobody knows what to expect from the “no name” aggregate.

Of course, in order for the heating equipment to work long enough, you should follow all the manufacturer's recommendations regarding operating conditions, and carry out the necessary maintenance in a timely manner. The user is able to cope with many emerging problems on his own thanks to the self-diagnostic tools available in modern equipment.

The service life of a gas boiler and its return directly depend on the quality of the coolant. The use of water with increased rigidity as a coolant leads to the formation of scale inside the heat exchanger. Scale, in turn, is the reason for a significant decrease in boiler efficiency and, as a consequence, to an increase in fuel consumption.

“Floor” and wall-mounted boilers “suffer” from scale, to approximately the same degree, only the difficulty level of solving an existing problem is different. The simplicity of disassembling and washing the steel heat exchanger of the wall-mounted boiler allows you to quickly restore the efficiency of heating equipment directly at the installation site.

From this it follows that the installation of a floor-standing boiler with a cast-iron heat exchanger suggests that you have a unit for chemical water treatment. This device is not cheap, but in this case is extremely necessary.

Depending on the implemented method of regulating the flame intensity, all boilers are divided into boilers with a step or modulated burner. One and two-stage burners have one or two operating modes, respectively (usually 100% and 70% of the maximum). The power of modulated burners can be continuously adjusted over a rather wide range, which allows fine tuning of the boiler. Modulated burners provide fuel economy and allow you to maintain the set temperature with minimal deviations.

A significant part of floor gas boilers is equipped with single or two-stage burners. Most wall-mounted models have a wide range of power modulation (from 40 to 100%), so they work "softer" - turn on and off much less often than boilers with step burners.

For some consumers, an important parameter of a gas boiler may be the dependence of its operation on electricity. The non-volatility of heating equipment is relevant for those whose house or cottage is located at a considerable distance from large settlements, i.e. in those places where interruptions in electricity or voltage surges in the network, leading to the failure of expensive automation, are possible.

The autonomy of the gas boiler can be achieved in two ways. The first is to simplify the boiler control system as much as possible. That is, it is necessary to use an aggregate in which electronics is completely absent. All automation of such a boiler is mechanical. A heating system that uses a similar boiler that works without electricity should be naturally circulated.

The second method is the use of an electric generator, which converts the heat obtained by burning gas into electricity, which is necessary for the automation of the boiler. This option is preferable for most users, because it creates fewer restrictions.

Non-volatile models can be found only among floor gas boilers, which for some buyers will be a weighty argument in favor of the latter.

Before choosing a floor or wall gas boiler, you should resolve the issue regarding the location of its installation.

Wall-mounted boiler due to its compactness can be placed in almost any room. The main thing is to fulfill a number of requirements that guarantee the safety of its operation: a closed combustion chamber, connection to a coaxial chimney, forced removal of flue gases and air injection, which ensures the combustion process. Installing a boiler with an open combustion chamber in a kitchen where there is an exhaust hood is unacceptable, because in this case the so-called “draft of the draft” is possible, in which the smoke from the boiler will go not into the chimney, but into the room.

There are not so many options for placing a floor gas boiler. Due to the size of the boiler itself, as well as all kinds of related equipment, we can only talk about a separate room - a boiler room.Despite the fact that the boiler room does not belong to residential premises, installing a gas boiler, it is necessary to ensure the normal exhaustion of the combustion products of the fuel and air flow.

The power of wall-mounted gas boilers, as a rule, varies from 10 to 40 kW. This, according to a rough estimate, is enough to heat a home with an area of ​​100 to 400 square meters. m. However, if part of the heat goes to heat water for domestic use, then this power is enough to heat only a relatively small house.

The possibilities of floor gas boilers are significantly higher. The power of floor models can reach 80-100 kW, and if it is equipped not with an atmospheric but with a pressurized burner, then even more. If you need to heat a huge house or production facility, then a floor boiler is exactly what you need.

The electronic brains of a wall-mounted gas boiler are more advanced, and it is more functional than the average floor unit. However, despite this, wall-mounted models are often 1.5-2 times cheaper. This is because the cost of heating equipment is determined primarily by its power and reliability of individual components, while the comfort of handling it is secondary.

The final comparison of wall and floor gas boilers 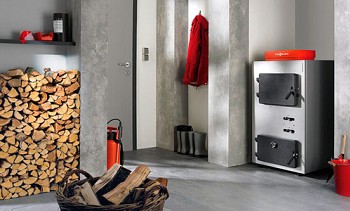 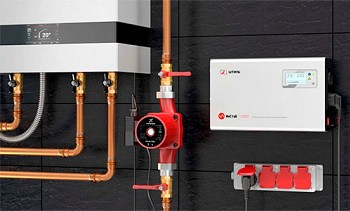 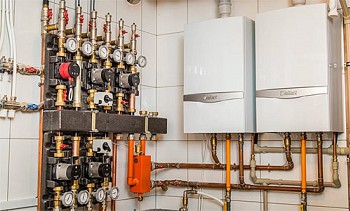 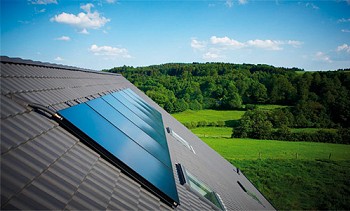 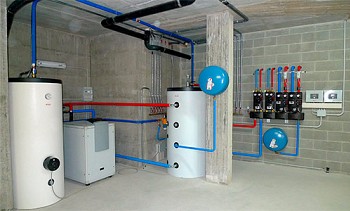 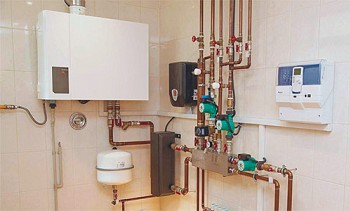 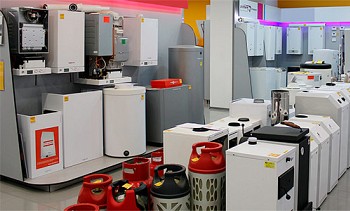 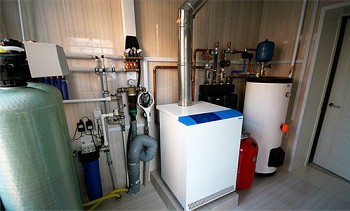 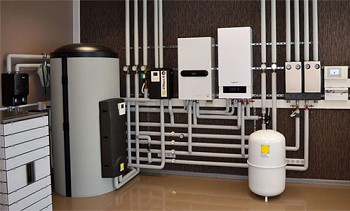